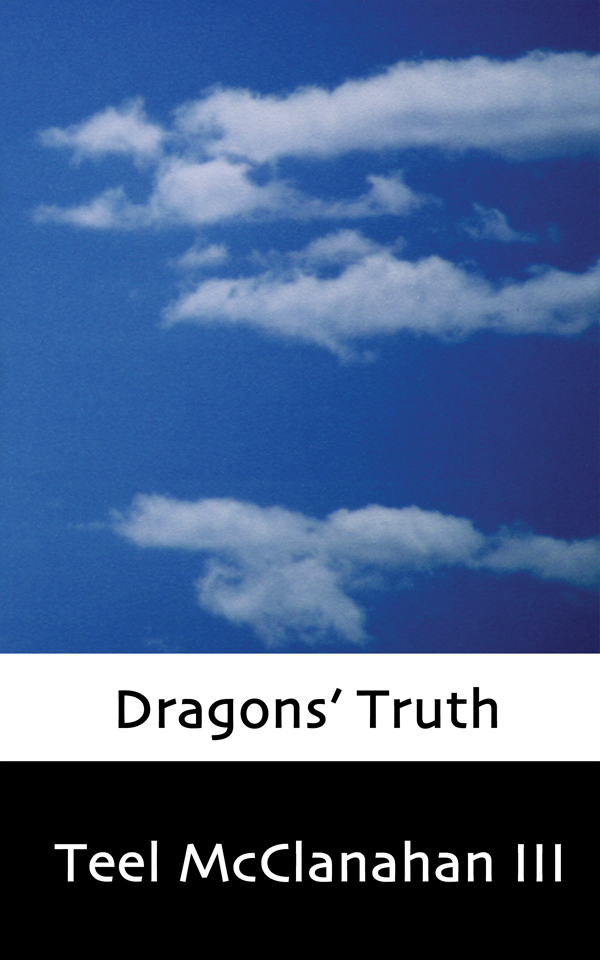 A novel of Contemporary Fantasy

The eBook edition of Dragons’ Truth is available under

; to the extent possible under law, Teel McClanahan III has waived all copyright and related or neighboring rights to Dragons’ Truth.

The Audio version of Dragons’ Truth was recorded in 2008, was read entirely by the author, Teel McClanahan III, and features a brief musical theme, also composed by the author specifically for the recording. Dragons’ Truth was podcast both on the Modern Evil Podcast in 15 parts and on Podiobooks.com in 8 parts. The MP3 version contains the same basic recordings, but without intro/outro on every file. In addition, where multiple chapters were combined into fewer files for Podiobooks.com, they are presented as single files when you purchase the audiobook—one MP3 per chapter. With separate tracks at the beginning and end of the audiobook for the Introduction and Thanks, there are a total of 17 tracks.

Dragons’ Truth is not just the coming-of-age story of a boy who meets a dragon and the way the dragon’s teachings change his life, but also represents a sort of allegory about some of the problems with the separation of the common man from higher education and the world of academia.

It is suitable for young readers as well as adults.

When two young boys decide to skip school and seek adventure one day, they end up finding much more than they ever bargained for. More than the dragon and the mountain of riches they see at first, one of the boys finds the entire course of his life changed.

That boy, Larry, finds himself at the center of an adventure bigger than anything he’d ever dreamed of. And when Larry’s continuing adventure begins to effect his schoolwork, and then his teachers and his entire school, Larry’s not sure what he’s gotten himself into. When the effects of that seemingly innocent day begin to spread throughout – and then to threaten – his entire nation, Larry is forced to take action or face the destruction of the entire human race as a result of a single day of hooky.

Join Larry as he grows from a little boy into the last chance for survival that humanity may have, and find out just how complicated a happy ending can become…

Teel is a lifelong resident of Arizona, and like most lifelong residents of Arizona, he longs to visit faraway places. Places with exotic things like weather, and trees. Places from which he can return happy and secure in the knowledge that while you always have to shovel snow, you never have to shovel heat. He does believe in dragons, though he won’t tell you the real trick to finding one, or surviving if they decide to kill you.