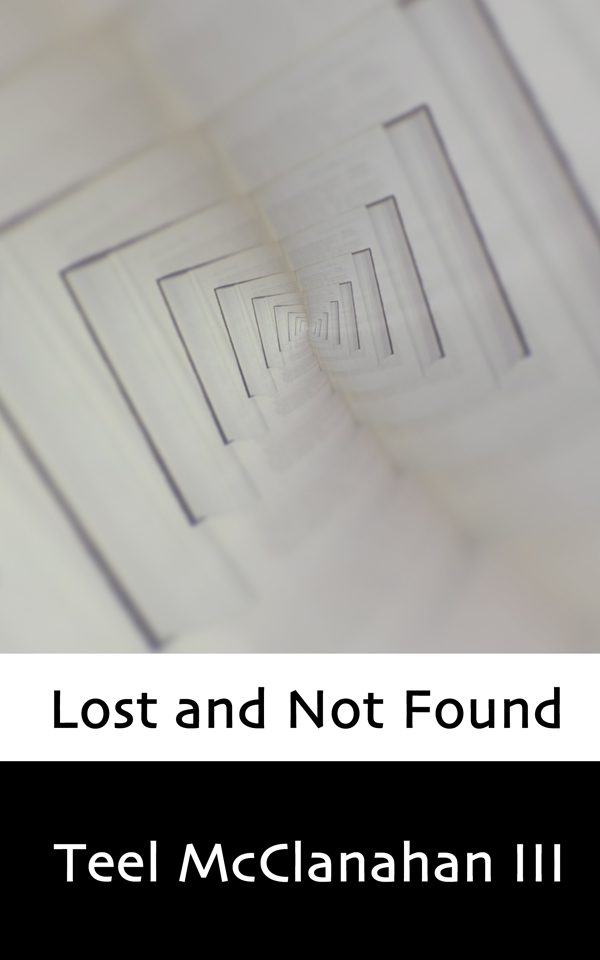 A novel with fantasy, literary, and superhero elements

Lost and Not Found is available under

; to the extent possible under law, Teel McClanahan III has waived all copyright and related or neighboring rights to Lost and Not Found.

He gave up on writing years ago, around the same time he thought love gave up on him. For years he tried to live a normal life, to work a normal job, and to forget about his dreams. He tried to believe they were only dreams.

Then out of the blue he is struck with the sudden compulsion to write a novel, and discovers a group of people who share that same goal, but who attempt to complete a first draft in under a month – and the month is about to begin!

At first he talks his friends into joining him, but it isn’t long before most of them give up, and he’s left to struggle with his word count in seclusion. Then he loses his job, and finds himself totally rejected and alone, with nothing but time to write. He doesn’t know where to begin his novel, and finds himself writing the story of a superhero just as rejected and alone as he feels…

Rejection is not the end of the story though, and after being defeated by storytelling and social pressure, will he be able to find the story he was always meant to tell? The story he has always been a part of, one of magic and of love fulfilled? Or are the stories he’s heard of a clock ticking down to Doomsday real? And is life worth living if you haven’t a story worth telling?

In this, the debut novel from creative mind Teel McClanahan III, we follow the stories of a young man trying to write his own debut novel. Faced with the added challenge of trying to complete a novel in only one month, he pours himself literally into the process. But are his attempts at fiction hitting a little too close to home? As he tries to live on one side and write on the other, he finds that the line between imagination and reality may not exist at all.

Will he finish his novel in time? Will he end up with the woman of his dreams? Will he choose to anchor himself in reality, or lose himself in his own fiction? And which of these would really be the better outcome?

Teel McClanahan III was never born but was dreamt alive by an unknown entity older than time and faster than imagination. Lost and Not Found is his twenty-fifth published autobiographical novel, and everything in it really happened*.

Write a novel in a month

Within the first few pages of Lost and Not Found the main character learns about a group of people who, once a year, attempt to write an entire novel within the space of a single month. In the novel, the month they attempt to accomplish this feat in is the most difficult of months: February. In reality, such a group exists, but they (or should I say, we) attempt to write a novel in the somewhat less aggressive month of November. I can tell you from personal experience that between the two extra days and the long Thanksgiving weekend (here in the US), November offers quite an advantage over the situation I wrote my characters into.

The real-life event is called National Novel Writing Month, or just NaNoWriMo for short. According to this page, in 2011 there were over 250,000 participants from all over the world, and at least 36,000 of them “won” – writing an entire novel from scratch in under one month. In 2011, I wrote around 65k words toward the Never Let the Right One Go duology during November. I’ve thrown my hat in the ring every year since NaNoWriMo 2002, and have “won” a little over half the time so far. Lost and Not Found, in fact, contains most of my first NaNoWriMo novel, from 2002, as well as a fictionalized version of the process of writing that novel.

Of course, keep in mind that what you write in November (and I encourage anyone who’s ever thought they might give writing a try to try NaNoWriMo) is only a first draft. I worked for another year (right up to NaNoWriMo 2003, actually) on trying to turn that first draft into the story I wanted to tell. In that time, it doubled in length and took on several layers of depth, symbolism, and a matured character arc for the main character. The final product is as much about the writing process and the pressures and challenges of writing as it is about love and relationships and fairy-tale endings.

If you want to learn more about NaNoWriMo, or if you want to be inspired to try your hand at writing, I recommend two things: 1) Go to NaNoWriMo.org and read what they have to say about it, and sign up. 2) Read (or listen to) Lost and Not Found; if you go the audio route, episodes 1 and 2 of the audiobook really have the most information about the month-long novel idea—just remember that in the book it’s February, and in real life it’s November.

*And if you believe that, you haven’t read the disclaimer on page 2.