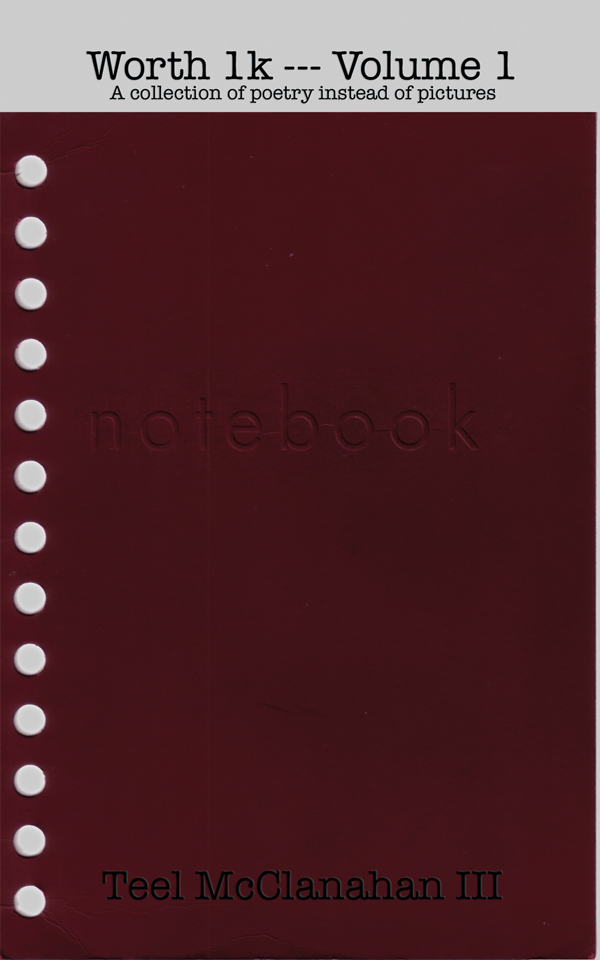 A collection of poetry instead of pictures

The eBook edition of Worth 1k — Volume 1 is available under

This book is a reproduction of a poetry journal I kept with me as I traveled.  In this case, the travel was a week-long cross-country road trip I took for my 28th birthday, through Utah, Idaho, Oregon, and California.  Traveling to beautiful places like Arches National Park, near Moab, Utah, Shoshone Falls, Idaho, and down the Pacific Coast Highway from North of Tilamook, Oregon to south of Santa Barbara, California, I didn’t use a camera to document my journey.  Instead, I took a small, red-covered journal with me and every time I wanted to take a picture or otherwise had a strong response to something, instead of taking a snapshot I got out a pen and wrote a poem to try to capture my experience.

The journal was prepared for publication in a unique format, with scans of the journal’s individual pages -to capture the raw, personal nature of handwriting in the moment- facing easy-to-read reproductions in a typewriter-style typeface.  Click here to read a PDF preview, featuring 10 selected poems from Worth 1k — Volume 1.

About the Author and the Worth 1k project

Teel is a lifelong resident of Arizona, and like most lifelong residents of Arizona, he longs to visit faraway places. Places with exotic things like weather, and trees. This book represents the sole record of such an excursion that Teel made during the week of his 28th birthday. Instead of snapping photographs, Teel carried around a notebook and wrote poetry to try to capture a more personal record of what he was experiencing as he drove around the American countryside. This is the first volume of what Teel hopes will be an ongoing project; a revolution of the mind to realize that a few words may be able to capture a place and time and feeling in a way most flat, still images never can.

The Audio version of Worth 1k — Volume 1 was recorded a couple poems at a time over multiple years, for the Modern Evil Podcast. The following is a list of links to all 27 episodes containing my readings of the poems from this collection, in the order they were written (and appear in the book):