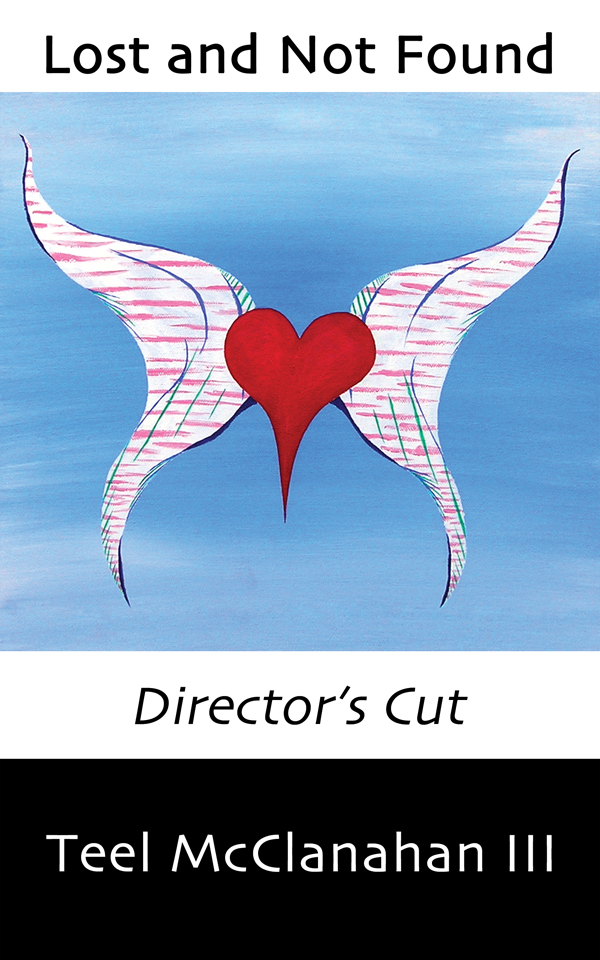 The Lost and Not Found – Director’s Cut is available under

; to the extent possible under law, Teel McClanahan III has waived all copyright and related or neighboring rights to the Lost and Not Found – Director’s Cut.

The Audio version of the Lost and Not Found – Director’s Cut was recorded in 2008 and 2010, and was podcast both on the Modern Evil Podcast and on Podiobooks.com in 6 parts. The MP3 Audiobook version contains the same basic recordings, but without intro/outro on every file.

True Love. No limits, no obstacles, no miscommunications. Only Love.

“Give up, let go, leave everything behind, follow your passions, and remember how to fly, and everything you’ve ever dreamed of can be yours.”

–That’s how this story goes. There’s no arch villain, no dark conspiracy, not even a comedy of errors. This story goes straight to the heart of happily ever after and, like true love, it never strays.

The Director’s Cut of Lost and Not Found begins where one person reaches that point of “enough is enough,” stops playing by the rules, and starts following his heart. Leaving behind everything that led to his decision, and restoring parts of the story that had once been left on the cutting-room floor, it delivers a new experience whether you’ve read the other editions or not.

In these pages you’ll find a faerie, a two-headed monster, titans young and old, a flying city, amazing museums, unusual time mechanics, and many more wonders as they’re discovered by two people in love. This cut of the book was made for the lovers and the dreamers out there.

About the Director’s Cut:

Lost and Not Found was the first look at the storybook universe expanded upon in Forget What You Can’t Remember, More Lost Memories, and Cheating, Death. This “Director’s Cut” of Lost and Not Found comes closer to my original intent, and to the original first draft of my 2002 NaNoWriMo novel, originally released in limited edition under the title Forlorn. Forlorn was written in the final 8 days of November, after a similar ordeal to the fictional one presented in Lost and Not Found.

In response to the criticism and feedback from a very vocal and adamant subset of the people who read Forlorn, and based on advise about what “all” fiction “needs” I spent the following year trying to find ways to give the story I’d written in Forlorn things like conflict, character arcs, and a three-act structure. I ended up cutting Skythia out completely, and writing a significant amount about the writer’s life and the journey toward the heart of the story, which I’ve always believed starts with the word ‘Forlorn.’

I released the First Edition of that expanded, “fixed” book as Lost and Not Found in 2004, and I’ve been receiving two kinds of feedback from readers in the five years since then: One group of people liked the book right up until the word ‘Forlorn.’ This group thinks the rest of the book is a “wrong turn”, and they were disappointed by it. The other group of people typically don’t even remember what happened in the book before the word ‘Forlorn.’ They understood the heart of the story to be the same thing I did, and they loved it.

This painting was designed and painted specifically to create the cover of the Lost and Not Found – Director’s Cut.