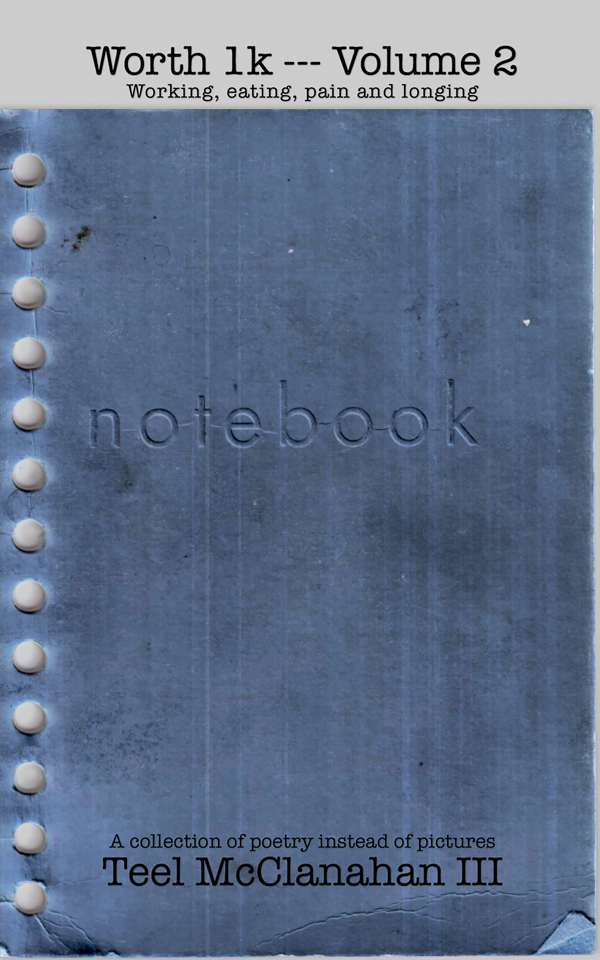 A collection of poetry instead of pictures

The eBook edition of Worth 1k — Volume 2 is available under

This book is the second of the poetry journals that I’ve kept with me as I traveled, though unlike Worth 1k — Volume 1, most of the travel was back and forth to work and travel around town and travel into the many depths of depression.  There are still some attempts to capture something visual, but by the end of this journal it was clear to me that the bulk of the poems had more to do with my emotional landscape than with the physical landscape stretching out around me.

Rhiannon Hobkirk, someone I met shortly after the paperback edition of this work was put into print, said “This book will make you want to slit your wrists. The poetry itself is fantastic, and if suicidal is the mood you’re looking for, this is the perfect book to help you find it.”  Several other people who read it have said that it made them want to give me a big hug.  I count each of these responses as representative of having captured genuine emotion within this volume of poetry.  You can read 15 selected poems from this volume in this PDF Preview.

About the Author and the Worth 1k project

Exploring a world where digital photography is ubiquitous and the value of words is diminishing in a sea of noise (and of blogs, videos and photostreams), Worth 1k seeks the other side of the equation describing a picture’s supposed worth. Examining a sometimes mundane daily life (including its pain and loss and longing) through words -not endless streams of words updated and distributed digitally to the world in an instant, but brief snapshots of experience and emotion hand-written and collected over months- this poetry seeks to illuminate what cannot be readily captured by one image or by a thousand images flashing by on a glowing screen, trying create the illusion of life.

Worth 1k is language leveraged.

It is also very personal, a sort of journal of the life of Teel McClanahan III. If there are universal themes here (such as evil ham, for example), it is because Teel lives in the same universe as you. Actually, he lives in Phoenix, AZ, so judge that for yourself. He is the author of several works of short fiction, serial fiction, novels, poetry, and, yes, even an online journal.

The Audio version of Worth 1k — Volume 2 was recorded a couple poems at a time over multiple years, for the Modern Evil Podcast. The following is a list of links to all 32 episodes containing my readings of the poems from this collection, in the order they were written (and appear in the book):